Amigo (アミーゴ, Amīgo) is the main protagonist of the Samba De Amigo franchise. He is a monkey from Mexico who dreams of being the greatest maraca player. As a Sega character, Amigo has appeared in several crossovers with NiGHTS.

A Samba de Amigo-themed pinball table is one of the three that can be played in Sonic Pinball Party. The goal of this table is to finish each song with an A rank.

Amigo appears in Sega Superstars, in a Samba de Amigo thematic mini game. In the mini game, the players chooses a song, and then must hit 6 different targets around the screen as the 'beat balls' reach them in time with the music. Posing with hands over 2 of the targets, or holding a position until a trail of beat balls is complete may also be required from the player.

Amigo is not a playable character in Sonic Riders, but he does make a cameo appearance in the Sega Carnival circuit.

Amigo, along with Billy Hatcher from the Billy Hatcher and the Giant Egg and NiGHTS, appeared in Sonic Riders: Zero Gravity as an unlockable SEGA guest character, being the replacement of AiAi. Amigo is a speed type character, meaning he can slide on rails found throughout the circuits. Amigo's personal Extreme Gear is called Rhythm Machine. It is a board type Extreme Gear designed after Amigo's maracas.

Amigo appears as a playable power-type character in Sega Superstars Tennis, which allows him to hit the ball with more strength than other character types. When Amigo's super move is activated, a cutscene will play where he replaces his tennis racket with his maracas. After that, Amigo will make maracas spawn in the opponent's side of the court, which will stun opponents who run into them. Amigo's home stage is the Carnival Park.

Amigo appears as an unlockable character in Sonic & All-Stars Racing Transformed. He can be unlocked by buying 8 stars in World Tour. Amigo drives a windup wooden train that transforms into a paddle boat for water and a 1940's fighter plane for air racing. For his All-Star move, Amigo shoots maracas at the opponents. 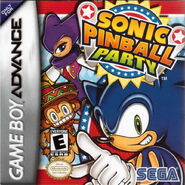 Amigo with NiGHTS and Sonic in Sonic Pinball Party.