The Bullies are three minor antagonists in NiGHTS into Dreams and the NiGHTS Archie Comics who are the driving force of Elliot's story. They challenged and defeated Elliot and his friends in a basketball game, then bullied and laughed at Elliot, making him feel embarrassed in front of his friends.

In the Archie Comics, it was revealed that the blonde bully is called Roger Wilkeah. The name of the other two are currently unknown.

All three of them wear the same clothes; a red t-shirt with blue lines on the sleeves a upturned red collar with yellow hues, orange capris trousers, red socks and dark red shoes with blue and yellow trim.

The Bullies first appeared during Elliot's opening cutscene, in Elliot's dream. Elliot was playing basketball with his friends, when the Bullies appear and challenge Elliot for a basketball game. The Bullies defeat Elliot and his friends, then laugh at Elliot, making him feel embarrassed. Shortly after, the Bullies turn into Nightmarens, making Elliot run away.

The Bullies don't make another appearance until Elliot's ending cutscene, where Elliot comes back for a rematch filled with courage to overcome his fear. The Bullies are defeated by Elliot and aren't seen since then.

The Bullies return to the NiGHTS Archie Comics, where they reprise their role in the game.

The two unnamed bullies continue being just minor characters. However, Roger becomes a major character who even goes to the Night Dimension, helps Reala and the Nightmarens fighting NiGHTS and dualizes with Reala.

In the first Issue, the Bullies once again, defeat Elliot in a basketball game, then laugh and humiliate him. In the second Issue, Roger joins forces with the Nightmarens. Roger and Reala not only dualize, but also switch bodies. Reala goes to the Waking World through Roger's body and naively talks about Wizeman's plans at the Twin Seeds Museum, making Roger's friends confused.

In the third issue, Roger and Reala return to their respective bodies and Roger returns to the waking world. After NiGHTS, Elliot and Claris defeat Wizeman, Elliot's and Roger's teams face each other and Elliot's team wins.

Roger Wilkeah, the leader of the Bullies in NiGHTS into Dreams.

One of the Bullies in NiGHTS into Dreams.

One of the Bullies in NiGHTS into Dreams.

The Bullies turning into Nightmarens. 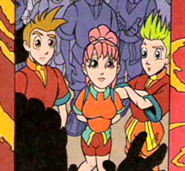 Two of the Bullies with Claris in the Archie Comics.