Chamelan, (キャメラン Kyameran) also known as Chamelan the Magician, is a second-level Nightmaren and boss in NiGHTS: Journey of Dreams. He is a humanoid magician chameleon.

Chamelan is a humanoid reptilian wizard that resembles a chameleon. He sports the four shapes of the four playing card suites (hearts, clubs, diamonds, and spades) on his colorful tuxedo and hat and uses playing cards in both his first and second battles. In fight one, the players use the cards as a way of finding Chamelan and in fight two, he also uses bombs. In both fights, he uses Kings, Queens and Jacks that attack NiGHTS on his behalf.

Chamelan is Lost Park's boss and a Will Nghtmaren, who'll first attack after NiGHTS destroying all of the NiGHTS captures in the level. He later returns to a second and final fight after beating all of the Lost Park's missions. His boss theme is called "Cackling Chamelan".

Chamelan will stay hidden behind a giant curtain during the whole battle, leaving his cards to chase and attack NiGHTS.

To defeat Chamelan, the player must paraloop the curtain to find him. Once they accomplish that, the player will need to paraloop Chamelan one more time to defeat him. If the player takes too long to do it, Chamelan will try to escape and hide somewhere else.

In the second battle, the player will need to be more careful, as Chamelan will hide bombs behind the curtain, which will cause a huge explosion and damage NiGHTS.

An easy way to find Chamelan is by looking at the cards behind the curtain. There is a trail of cards organized in numerical order with the card number one being replaced with an Ace card (a card with the letter "A") and Chamelan will always stay behind this particular card. So once the player find the trail of cards, they shall follow it until they reach the card number 2, as the Ace card where Chamelan is hidden will be right next to it.

It is also possible to follow Chamelan's shadow starting at the very beginning of the mission and follow it until he stops where he will be hiding.

Chamelan's arena takes place in a surreal cavern with playing cards and floating spotlights. The arena is shrouded by a void with plant life hidden behind it. Question marks appear on the curtain if the player delays long enough.

"This lounge lizard stage magician always has an ace up his sleeve – and usually more than one! While Chamelan hides behind a spatial distortion at the end of Lost Park, his playing card soldiers to their best tocut more than your deck. Chamelan's spatial distortion is almost impenetrable, but it can't hold up to NiGHTS' Paraloop. Clear the distortion away by Paralooping it, and look for Chamelan near the ace in the line of cards. Paraloop him to cut his act short"[2] 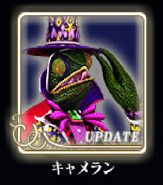 Chamelan icon from the NiGHTS: Journey of Dreams Japanese site.

Chamelan's page in the NiGHTS: Journey of Dreams site.