Nights into Dreams Wiki
Register
Don't have an account?
Sign In
Advertisement
in: Characters, Bosses, Nightmarens,
and 4 more
English

Unknown (In the games)

Clawz (クロウズ Kurōzu) is a second level Nightmaren and boss in NiGHTS into Dreams. He is a black shadow cat with wings.

Clawz is a giant black cat with a sinister smile and yellow star on his forehead. He has yellow and red stripes on his back, legs and tail, blue paws with red claws and blue pointy wings.

Clawz is shown to be sneaky and avoids melee combat by always running away from NiGHTS and shooting fireworks at them. His Japanese bio also states that Clawz is spiteful by nature[1] and is described to "rather torment you from the shadows than attack you fair and square",[1] which means that Clawz may play dirty if he needs to in order to get what he wants.

In NiGHTS into Dreams, Clawz is Frozen Bell's boss and an Nightmaren encountered in Elliot's story. He will attack after all Ideyas are collected in the level. His boss battle theme is called "E-Le-Ki Sparkle".

Clawz will always stand above one of his mice fireworks and everytime NiGHTS comes close to him, Clawz will jump to another one, far away from them.

Once most of his fireworks are destroyed, Clawz won't be able to run away from NiGHTS anymore and the player will be able to knock him out with a single hit. For unknown reasons, a spotlight follows Clawz throughout the battle until the player takes out the last mouse. After the battle, Clawz isn't seen again.

Clawz's battle takes place on a weird carousel-like machine full of fireworks with pink mice heads, the machine appears to be surrounded by big walls made of colorful bricks, for unknown reasons, the walls have holes with a bright light coming out of them.

Clawz is the only NiGHTS into Dreams boss character who didn't have any significant role in the Archie Comics. Instead he simply appears as a background character throughout the story, acting as Reala's pet.

In the first issue, Clawz first appears looking at the portal Wizeman is creating to go to the waking world. He and the other nightmarens later tries to capture NiGHTS after the latter escaped with the red ideyas. In the second issue, Clawz makes a small appearance after Claris defeated Gulpo, where he eats Gulpo alive.

In the third issue, after NiGHTS, Elliot and Claris defeated Wizeman, Clawz appears being petted by Reala, who is thinking about his plans as the new ruler of Nightmare. In the fifth issue, Clawz, along with Gillwing, Puffy and Jackle, tries to fight Reala, after the latter proclaimed himself the new ruler of Nightmare. Before Clawz or any of the nightmarens have a chance to fight Reala, the latter attacks and makes them fall into an abyss. Clawz makes one last appearance at the sixth issue, where he tries to attack Roger, but is surprised by Reala, who makes him blow up.

"A Second-Level black cat with sharp claws, he's spiteful by nature and would rather torment you from the shadows than attack you fair and square. So, just how far will NiGHTS have to chase those quick feet…?"[1] 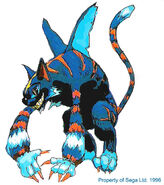 Clawz in NiGHTS into Dreams.

The game's hint on how to defeat Clawz.

Clawz in the game's credits.

Clawz, NiGHTS and the other bosses present in NiGHTS into Dreams.

Clawz in NiGHTS into Dreams (LCD).

Clawz as he appeared in the Nightmare Zone DLC in Sonic Lost World.

Clawz when he is defeated.