Crewles & Poles are third-level Nightmarens who work together as enemies in NiGHTS into Dreams. Crewle is supposedly the blue frog-like Nightmaren and Pole is the orange tadpole-like Nightmaren.

Crewle is a small humanoid blue frog with orange eyelids, a pointy nose and a green round torso. Pole is a big orange tadpole with blue eyes, long darkblue eyelashes, red clown-like cheeks and a long tail with yellow and cyan stripes.

Crewles & Poles can only be found in Mystic Forest. Once Claris enters the Nightopia, two Crewles & Poles will steal two of her ideyas. After Claris dualize with NiGHTS, the Crewles & Poles throughout the level will shoot small colorful orbs at NiGHTS which will not only shrink and slow them down for a limited time, but will also take five seconds from the timer.

Defeating a Crewle & Pole will add 200 points for the player's score.

A Crewle & Pole Mepian egg has a triangular shape, and it is blue colored with some green spots and dark blue stripes. 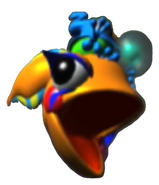 Crewle & Pole in the credits.

Crewle in NiGHTS: Flying Through the Sky Without Wings.