Nights into Dreams Wiki
Register
Don't have an account?
Sign In
Advertisement
in: Characters, Bosses (Christmas NiGHTS into Dreams), Humans,
and 5 more

Dr. Ivo Robotnik, better known by the alias, Doctor Eggman, is a human with an IQ of 300 who dreams of dominating the world and the main antagonist of the Sonic the Hedhehog series. His constant plots to create his Eggman Empire are always thwarted by Sonic and his friends.

In NiGHTS into Dreams, there's a score board in every level with the name of Sonic characters, which includes Eggman's name. With 2.000 points in each level, Eggman appears in fifth place in all of the score boards.

His battle is identical to Puffy's in NiGHTS into Dreams, where the player must grab and throw Eggman throughout Puffy's mansion until they reach the end of it, where there will be a shelf. By throwing Eggman under it, the support will break, causing him to get smashed between the wall and the tumbling shelf.

The boss theme is a remix of the final boss battle theme from the Japanese and European version of Sonic CD with some bits of Puffy's theme in it called "Rolling Eggman".

Eggman appears in Sonic Riders, as an unlockable character. Eggman is a power type character, which means he can destroy obstacles throughout the circuits. Eggman is one of the two characters in the game who doesn't have a personal Extreme Gear (the other being Shadow the Hedgehog), however his default Extreme Gear option a the bike type Extreme Gear called E-Rider.

Eggman returns to the Sonic Riders sequel, Sonic Riders: Zero Gravity, once again, being an unlockable characters in the game. Eggman is again, a Power-type character and the E-Rider returns as his default Extreme Gear.

Eggman appears as a playable character in Sega Superstars Tennis, as one of the eight starter characters. He is a Power character, a trait shared with Amigo and Gilius Thunderhead. This means that Eggman can shoot the ball with more strength. Eggman's superstar move will make him shoot the ball with eletric spike balls, which stun the opponents.

Eggman appears as an unlockable character in Sonic & All-Stars Racing Transformed. He is unlocked by completing both the 5 normal Grand Prix tournaments and the 5 mirror ones. Eggman drives a red six wheeled tank resembling Eggman's appearance. For his All-Star move, Eggman will create a holographic Death Egg around his vehicle and will shoot fire homing missiles at his opponents. 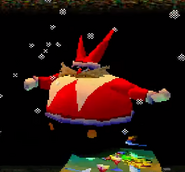