Nights into Dreams Wiki
Register
Don't have an account?
Sign In
Advertisement
in: Characters, Humans, Males,
and 2 more

Elliot's Friends are two unnamed boys who are members of Elliot's basketball team and supporting minor characters in NiGHTS into Dreams.

One of Elliot's friends has fair skin, brown eyes and brown hair, and is about the same size as Elliot. The other one has brown skin, short black hair, dark blue eyes and is a bit shorter than Elliot and his other friend. Both of Elliot's friends wear the same clothes as Elliot; a dark blue t-shirt with green lines on the sleeves, a upturned pale blue collar with yellow hues, green capris trousers with yellow trim, green socks, dark blue shoes with pale blue trim and a blue watch on their left hand.

Elliot's Friends first appear in Elliot's opening cutscene, where they are having a good time playing basketball with Elliot, when their game is interrupted by a group of older kids, who challenge and defeat Elliot and his friends in a basketball game, then bully and laugh at Elliot, making him feel embarrassed in front of his friends. The older kids then, turn into Nightmarens, scaring Elliot and making him run away. His friends mysteriously disappear during this moment.

Elliot's friends aren't seen again until Elliot's ending cutscene, where Elliot comes back for a rematch against the older kids, filled with courage to overcome his fear. Elliot and his friends defeat the older kids and then celebrate.

One of Elliot's friends later makes one last appearance in Elliot's secret ending cutscene, where he high fives Elliot.

Elliot's friends first make a small appearance in Issue 1, where they warn Elliot that they need to pratice basketball for real, because they are going to face up against Roger's team in two days. Elliot asks what is so special about Roger's team, when he is surprised by Roger himself, who beats him in a basketball game, then laughs and humiliates Elliot. Embarassed, Elliot's friends decide to go home.

In the second issue, Elliot's friends meet up with him at the Twin Seeds museum. What they don't known though, is that NiGHTS and Elliot have switched bodies. Inside the museum, NiGHTS naively talks about Wizeman's plans through Elliot's body, making Elliot's friends confused. Later at the museum, NiGHTS inside Elliot's body is trying to capture a Shleep in the middle of a food fight, when they lose grip, fall and faint, making Elliot's friends worried. Elliot eventually returns to his body and wakes up with his friends next to him. Elliot asks them if they saw a "little angel with wings" (referencing to Snuze) and they answer "no" confused.

In the fourth Issue, Elliot's friends make a small appearance when Elliot arrives at his school. Elliot friends notice that Elliot is very tired and ask him what is going on. However, they are ignored.

Both Elliot's friends later make one last appearance in the fifth Issue, where they see Elliot with Claris and ask him where he is going and who is the girl. However, Elliot ignores them as he is in a hurry to save NiGHTS.

One of Elliot's friends in NiGHTS into Dreams.

One of Elliot's friends in NiGHTS into Dreams. 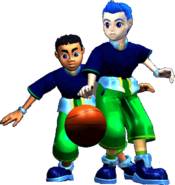 Elliot playing basketball with one of his friends. 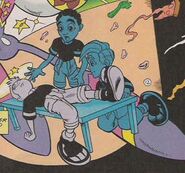 Elliot and his friends in the NiGHTS Archie Comics.