Emmanuel Weiss (or Mr. Weiss) is a mysterious man, owner of the Twin Seeds tower and major character in the second mini-series of the NiGHTS Archie Comics series.

Emmanuel makes two small appearances in the fourth Issue. First, he is seem watching the R.E.M. agents invading his tower through a computer and later being interviewed after the terrorist attack.

In the fifth Issue, Emmanuel is at his tower, when the lieutenant Lucy O'Lawful arrives with the news that the terrorists have escaped from her custody. Lucy takes this opportunity to question Emmanuel if he has noticed any weird happenings in his tower or if he has had any strange dreams. However, all Emmanuel reveals, with a sinister smile, is that he is planning to build five more towers.

In the sixth Issue, Lucy is at the tower, fearing that the terrorists will attack at any moment, while Emmanuel doubts that they will be able to invade his tower again. However, when he is alone, Emmanuel is surprised by the terrorists, who sneaked into the tower disguised as glass repairmen.

On the highest floor of the tower, Emmanuel starts talking with the R.E.M. agents and it is hinted that he is actually working with them, as Emmanuel agrees with their plan of blowing up the Twin Seeds tower. Emmanuel is last seem prior the terrorists attacking the tower with a bomb.

As the comic series was discontined after the sixth Issue, Emmanuel's goals or involvement with the terrorists were never explained. 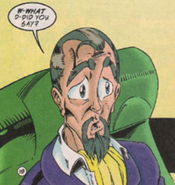