Nights into Dreams Wiki
Register
Don't have an account?
Sign In
Advertisement
in: Locations, Dreams, Dreams (NiGHTS into Dreams)
English

Frozen Bell is a dream world in NiGHTS into Dreams and Elliot's second level. The level is known as The Consciousness and its music theme is Take the Snow Train.

Frozen Bell is Elliot's second level and it is only available to be played after clearing Splash Garden.

Frozen Bell is set in a snow mountain with steep slopes. This level is most noted for its yellow train which Elliot can ride on. In the final course NiGHTS transforms into a bobsled to slide down the road.

This level is said to be reflecting Elliot's past. [1]

The enemies that can be found in this level are the Snips, Hollows and Gaos. The boss of this dream is Clawz.

"The frozen landscape is highlighter by railroad tracks which lead into the distance and towers which soar into the sky. Fly and climb over snowy mountains covered with steep slopes. Look high and low while swinging on the bars, for you can find many goodies. Race the bobsled run to gather Star Chips and Color Chips."[3] 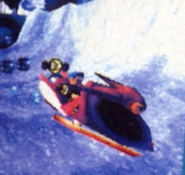 NiGHTS as a bobsled.