Nights into Dreams Wiki
Register
Don't have an account?
Sign In
Advertisement
in: Characters, Main Characters, Journey of Dreams Characters,
and 5 more

Goodles are grinning imp-like Nightmarens and enemies in NiGHTS: Journey of Dreams.

Goodles are dwarves-like Nightmarens with blue eyes and huge sinister smiles. They wear a green pilot hat with an orange stripe and a yellow emblem, and a green pilot uniform yellow buttons, orange collar and orange cuffs.

In Journey of Dreams, Goodles ride bird-like Nightmarens with peacock's tail. Some birds are pink, others are green and others are blue.

Goodles appear in every level but the Dream Gate, riding colorful bird-like Nightmarens. They are ordered by Reala to guard the keys keeping NiGHTS inside the NiGHTS capture.[1]

In every dream world, Goodles stay above NiGHTS cage, watching them. When the visitors dualize with NiGHTS and release them from the cage for a limited time, the Goodles will fly away and try to keep distance from NiGHTS until the time runs out. NiGHTS needs to catch the Goodles to get their keys and bring them to the cage before the time runs out to proguess to the next lap. Each level contains three Goodle, one for each lap; one rides a pink bird, the other a green one and the other a blue one.

"The Goodle is one of the first Nightmaren types you meet. You encounter Goodles in the Chase Mission of every dream world that Helen and Will enter. In each chase mission, you must pursue three bird-riding Goodles around three courses, defeating each Goodle to get a key that destroys the NiGHTS Captures on the courses. Goodles do not attack, but they're fast enough to give NiGHTS a run for his money!"[3]

Two Goodles in Crystal Castle, one riding a pink bird and the other a green one.

Concept art of the Goodle's key.

Goodle's page in the NiGHTS Journey of Dreams Japanese site. 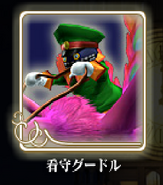 Goodle's icon in the NiGHTS Journey of Dreams Japanese site.