Nights into Dreams Wiki
Register
Don't have an account?
Sign In
Advertisement
in: Nightmarens, Characters, Nightmarens (NiGHTS into Dreams),
and 5 more

Hollows are owl-like Nightmarens and recurring enemies in the NiGHTS series.

Hollows are owls with pink head, a small yellow beak and green eyebrows with a yellow orb resembling a jester hat. They have a striped torso and orange feet as well as wings that are green on one side and pink on the other.

After the Visitors dualize with NiGHTS, the Hollows throughout the levels will shoot a small energy orb at NiGHTS. If NiGHTS gets hit, they will be damaged and will lose five seconds.

Defeating a Hollow will add 200 points for the player's score.

A Hollow painting also appears on Puffy's mansion during her boss battle.

The Hollow Mepians are almost completely indentical to a Hollow, having a very similar head with Hollow's beak and jester hat-like eyebrows, a striped torso with orange and blue stripes and small Hollow feet. A notable difference is that while Hollow's antennas are close to each other, the Hollow Mepian ones apart themselves from each other. Also, the wings on Hollow Mepians' back are just green and instead of arms, the Hollow Mepians have pink wings.

A Hollow Mepian egg is pink with a bottom that has orange and blue stripes.

Hollows appear in the Christmas NiGHTS version of Spring Valley. Once again, the Hollows will shoot a small energy orb at NiGHTS when they see them. If they succeed, NiGHTS will lose five seconds.

The Hollow Mepian and its egg are identical to their NiGHTS into Dreams' designs.

Hollows in the credits. 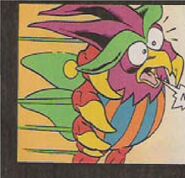 Hollow in the Archie Comics.

The Hollow Mepian from the Archie Comics.

Hollow in NiGHTS: Flying Through the Sky Without Wings.

Hollow in NiGHTS into Dreams (LCD).