Nights into Dreams Wiki
Register
Don't have an account?
Sign In
Advertisement
in: Featured Articles, Characters, NiGHTS into Dreams Characters,
and 6 more
English

Unknown (In the games)

Most noted for the funny look in his weird blue eyes, that toothy grin and those maniacal cackles we call laughter. Jackle is similar in physical appearance to NiGHTS, but is twice his size and wearing a different color scheme (whites, red, oranges, yellows and light blues). His hat curls forward and inward over his head rather than backward and outward like NiGHTS/Reala's hats and he wears a large cape which makes him invulnerable. Finally, only his clothing (shoes, gloves, cape and hat), eyes and teeth are visible. However, whether this is due to his body being invisible or due to a complete lack of a physical body is debatable.

In NiGHTS into Dreams, Jackle is Soft Museum's boss and an Claris Nightmaren, who'll attack after all Ideyas are collected in the level. His boss battle theme is called "The Mantle".

Jackle fights by throwing razor-sharp tarot cards that slow NiGHTS down on impact. The player needs to remove his cape to make him vulnerable, by evading his projectiles and dashing into him. Once he's lost his cape, he will no longer attack, and NiGHTS will be free to damage him by touch-dashing him. Immediately, he will make a beeline for the safety of his cape again, the player must try to stand between them when attacking to halt his progress. To score a 2.0, the player must have at least 105 seconds remaining.

His boss room consists of oversized toys and instruments of torture in bright primary colors. The entire room is encased in red drapes reminiscent of a circus tent and is littered with toy blocks and blue and green dolls with crazed looks on their faces. Two notable items in his boss room are a gigantic purple and yellow star-print jack-in-the-box and an oversized red and yellow guillotine, at rare occasions, the guillotine will drop after defeating Jackle.

In the Archie Comics series, Jackle appears to be the third nightmaren in command, after Wizeman and Reala respectively. In the first Issue, Jackle first appears looking at the portal Wizeman is creating to go to the waking world. He and the other nightmarens later tries to capture NiGHTS after the latter escaped with the red ideyas.

In the second issue, Jackle captures Napp and turns him into a Mepian to help the Nightmarens fighting NiGHTS. Afterwards, Wizeman orders Jackle to fight Elliot (contradicting with the game, where he is a Claris nightmaren) who's dualized with NiGHTS. As they were about to fight, NiGHTS leaves Elliot to help Claris, who's being attacked by Gulpo. NiGHTS soon returns and dualizes with Elliot once again. Jackle is almost defeated when he tries to convince Elliot to give him his red ideya and in exchange, all of his dreams coming true. However, Elliot refuses to and defeats Jackle.

Jackle later makes one last appearance in the fifth issue, where he tries to fight Reala along with Gillwing, Puffy and Clawz after Reala proclaiming himself the new ruler of Nightmare. Before Jackle or any of the nightmarens have a chance to fight Reala, the latter attacks and makes them fall into an abyss.

Jackle was going to make a cameo in Sonic Adventure and Sonic Adventure DX, as a card in the NiGHTS thematic pinball table from Casinopolis[1], but his card was scrapped for unknown reasons. It is also possible to make the chaos from Sonic Adventure look like Jackle by giving them power animals,[2] however it is unknown if this was intentional or not. Also, a NiGHTS sticker set, which included a Jackle sticker, was made for Sonic and All-Stars Racing Transformed, but it was not used in the final game.[3]

"Wrapped in a huge cloak, this is one insane Second-Level. He'll use totally bizarre and unthought of methods-whatever it takes, really-to scare visitors. Stored within his cloak is the unrivaled power to repel whatever attacks come this way. Rumor has it that Wizeman intended for him to be a First-Level, but something failed in that moment of creation…"[4] 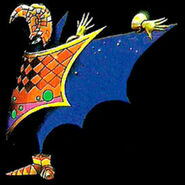 Illustration of Jackle, NiGHTS, Reala, Puffy, Nightopians and the city of Twin Seeds.

Jackle in NiGHTS into Dreams.

Jackle, NiGHTS and the other NiGHTS into Dreams bosses.

Jackle in the game's credits.

The game's hint on how to defeat Jackle. 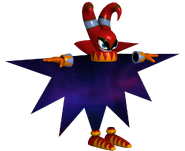 Jackle when he is attacked.

Jackle when he is defeated.