Kircles are crab-like Nightmarens and recurring enemies in the NiGHTS series.

Kircles resembles crabs, more specifically hermit crabs. Their shells, which bizarrely are also their faces, have red and white stripes as well as four yellow spikes, and their big claws have red, yellow and orange stripes.

In NiGHTS into Dreams, Kircles can be found in Spring Valley, Mystic Forest and Stick Canyon. Once either Elliot or Claris enter in one of these Nightopias, two Kircles will steal two of their ideyas. After the Visitors dualize with NiGHTS, the Kircles throughout the levels will try to grab NiGHTS' feet and drag them to the ground. If the Kircles succeed, they will blow up, damaging NiGHTS and making them lose five seconds.

Defeating a Kircle will add 200 points for the player's score.

A Kircle painting also appears on Puffy's mansion during her boss battle.

The Kircle Mepians' head is nearly identical to Kircle's shell faces, being a small striped shell with red and white stripes and four yellow spikes. The Mepians have big and blue colored eyes.

The Torso also resembles Kircle's shell, though this time, the front has a lot of small red and white stripes. The arms and the legs resemble Kircle's orange limbs.

The Kircle Mepians got claws instead of hands, and they are identical to Kircle's, and their feet look like red shoes with an orange stripe.

A Kircle Mepian egg is red with white stripes and spots.

Kircles appear in the Christmas NiGHTS version of Spring Valley. Once again, the Kircles will steal two of Elliot and Claris ideyas once either enter in the level, and they will try to grab NiGHTS' feet and drag them to the ground. If the Kircles succeed, they will blow up, damaging NiGHTS and making them lose five seconds.

The Kircle Mepian and its egg are identical to their NiGHTS into Dreams' designs.

Kircle in the game's credits.

Kircle in the Archie Comics.

Kircle in NiGHTS: Flying Through the Sky Without Wings.

Kircle icon in the NiGHTS Storybook.

Kircle in NiGHTS into Dreams (LCD). 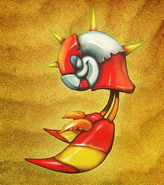