Lucy O'Lawful is a lieutenant and major character in the second mini-series of the NiGHTS Archie Comics series.

Lucy first appears at the end of the Issue 4, where she tries to capture NiGHTS, thinking they are a terrorist. But NiGHTS is able to escape from her by hiding in a clowns parade.

In Issue 5', Lucy starts interrogating the three terrorists, who were arrested in the previous Issue, thanks to NiGHTS. She asks why they tried a terrorist takeover of the Twin Seeds tower and who was the mysterious purple being working with them. All they reveal is that there's something very weird happening with the tower and that NiGHTS wasn't working with them, in fact, NiGHTS was the reason their takeover failed.

Shortly after, Lucy is surprised by the leader of R.E.M., who invades the police department with a tank to rescue the three arrested members. Fearing that a second terrorist attack will happen, Lucy goes to the Twin Seeds tower to warn its owner, Emmanuel Weiss, that the terrorists have escaped from her custody. Lucy takes this opportunity to question Emmanuel if he has noticed any weird happenings in his tower and if he has had any strange dreams. However, all Emmanuel reveals is that he is planning to build five more towers.

In Issue 6, Lucy is with Emmanuel at the Twin Seeds tower, fearing that the R.E.M. agents will attack at any moment. When she separates from Emmanuel, the R.E.M. agents, who were disguised as glass repairmen, take Emmanuel with them. Later at the end of the comics, Lucy believes that the R.E.M. agents have invaded the tower, as she finds broken glass all over the lobby floor. Lucy is last seen calling the police forces to investigate the tower. 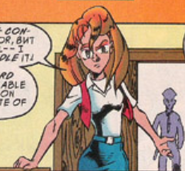