Miles Prower (マイルス・パウアー Mairusu Pauā, lit. "Miles Pouer"), better known by his nickname, Tails (テイルス Teirusu) is a genius two-tailed fox and Sonic the Hedgehog's sidekick in the Sonic the Hedgehog series. Tails is a character who has appeared in several crossovers with NiGHTS.

In NiGHTS into Dreams, there's a score board in every level with the name of Sonic characters, which includes Tails name. With 10.000 points in each level, Tails appears in third place in all of the score boards. He goes by his real name (Miles) on the score board.

Tails appears as a one of the seven starter characters. Tails is a Fly-type character and his personal gear is called Yellow Tail.

Tails, along with NiGHTS and other SEGA characters, appears as an optional coach in Sega Splash! Golf.

Tails returns to the Sonic Riders sequel, Sonic Riders: Zero Gravity, once again, being one of the seven starter characters in the game. Tails is again, a Fly-type character and the Yellow Tail returns as his personal Extreme Gear.

Tails appears as a playable character in Sega Superstars Tennis, where he is a spin type character. When Tails super move is activated, a cutscene will play where he create wind with his tails. After that, Tails will make the opponents dizzy when they hit the ball back to him.

Tails appears as a playable character in Sonic & All-Stars Racing Transformed, being one of the ten starter characters. He drives White and yellow car that resembles the Whirlwind S7, with a prominent spoiler, and a turbine-like engine on each side. For his All-Star move, two little airplanes will appear around tails and they will shoots missiles at the opponents.

NiGHTS and Reala were fighting against Storm Eagle and Storm Owl at the Dream Gates, when Tails along with Air Man from the Mega Man series appear to help them. After defeating the Mavericks, Tails and Air Man ask if NiGHTS and Reala would like to join the battle against Sigma. NiGHTS greatly accepts their invitation white Reala, at first, didn't want to join them, however, Wizeman orders him to, as Wizeman does not want Sigma to challenge his conquest for Nightopia. 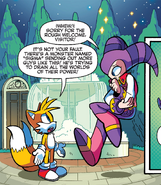 Tails and NiGHTS in Worlds Unite.