The Music Director is a minor character in the NiGHTS Archie Comics series. He is a very demanding and rude man, who is in charge of choosing a person to be the headlining singer of the Twin Seeds centennial commemoration celebrations.

The Music Director only appears in the third Issue. He is first seen when Claris' goes to sing in the audition. As Claris gave her Red Ideya away to Wizeman in the previous Issue, she makes a very souless perfomance which the Music Director and the other two Judges disliked a lot.

Later in the same issue, after NiGHTS, Elliot and Claris defeating Wizeman, Claris goes back to the audition and surprises the judges with her voice. This makes the Music Director select her to sing at the Twin Seeds centennial commemoration celebrations.

Claris was still singing at the audition, when Elliot enters the tower after being attracted to her voice, and starts talking with her. The Music Director tells Claris that she is too busy to have visitors, but Claris answers him that Elliot is a very special guest. Claris takes this moment to ask the Music Director to give Elliot one of the best seats in the house during her perfomance. The Music Director is last seen asking why. However, he presumably granted Claris' request. 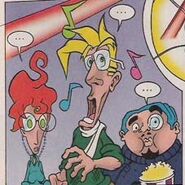