NiGHTS: Flying Through the Sky Without Wings

NiGHTS: Flying Through the Sky Without Wings

December 5th, 1996 (Japan Only)
NiGHTS: Flying Through the Sky Without Wings (or NiGHTS storybook for short) is a Japan-exclusive NiGHTS storybook, released in 1996. It tells a small adventure about NiGHTS and Elliot trying to save Nightopia from the Nightmarens.

The book was written by Kyoko Inukai, illustrated by Takumi Miyake and published by Futabasha. In 2008, the book got a second print (only in Japan) when NiGHTS into Dreams was released for the Playstation 2 in Japan. It is based on NiGHTS into Dreams.

NiGHTS is playing flute, surrounded by Nightopians, when Reala appears and challenges them for a game to see who flies higher and faster. NiGHTS fails to notice that it's a trap and accepts Reala's challenge. It's when NiGHTS is distracted that Reala imprisons them inside an Ideya Palace and leaves.

Stuck inside the Ideya Palace, NiGHTS starts playing their invisible flute after getting over the fact they can't do anything to escape. Their flute's sound attracts Elliot, who was exploring the world of dreams. Elliot releases NiGHTS by using a mysterious red light which makes them fuse. As they fly through Nightopia, NiGHTS and Elliot befriend each other.

When NiGHTS is about to explain to Elliot what was the red light which fused them together and that Elliot was curious to learn about, the Nightmarens start attacking. After NiGHTS and Elliot paralooping them, Reala returns and reveals to Elliot that NiGHTS is a Nightmaren, which shocks Elliot and makes him panic. Reala takes this opportunity to unfuse NiGHTS and Elliot, imprison NiGHTS again and send Elliot, who's unconscious, to the top of a cold and dark cliff.

When Elliot gets conscious again, he still is shocked over the fact that NiGHTS is a Nightmaren when he starts hearing NiGHTS screaming for help. NiGHTS tells Elliot to trust them and dive into the darkness under the cliff. Despite being very afraid, Elliot notices Nightopia getting destroyed by the Nightmarens and remembers that NiGHTS is his friend. Once he jumps into the darkness, Elliot starts glowing red and flying by himself. His ideya makes Reala flee and NiGHTS is released from the prision.

As NiGHTS and Elliot were celebrating Reala's defeat, Wizeman appears and wraps both into deep darkness. However NiGHTS and Elliot trusted each other and started glowing red again. Their courage made a tiny light appear. When they came closer to it, the light absorbed all of the darkness. Wizeman fleed, but promised to return as soon as weakness is born again inside either NiGHTS or Elliot's heart. Nightopia was finally saved from the Nightmarens. 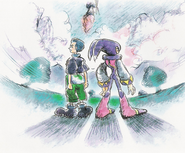 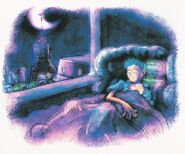