Nights into Dreams Wiki
Register
Don't have an account?
Sign In
Advertisement
in: Games, NiGHTS games, Other Medias

Just like in NiGHTS into Dreams, the player first selects a visitor (either Elliot or Claris) and makes them dualize with NiGHTS. The game's goal is to collect 20 Blue Chips to break the Ideya Capture and recover a stolen Ideya, then return to the Ideya Palace before the time runs out. Once all four Ideyas are recovered, NiGHTS will face a boss; Clawz, Puffy, Gillwing or Reala. The player clears the level after defeating the boss.

If the time runs out, the visitor will unfuse with NiGHTS and they will have a limited to go back to NiGHTS and dualize with them again, as the Alarm Egg will be activated and will try to force them to wake up, resulting in a game over.

In this game, NiGHTS also has a health bar. Not avoiding the Hollows, Kircles and Shleeps will take energy from the health bar. If the health bar reaches zero, it is instantly game over. If the player finds a Nightopian during the level, they will retain their health bar's energy. 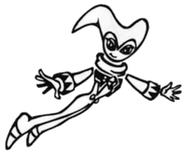