The Nightmarens are the main recurring antagonists of the NiGHTS series. They are residents of Nightmare who invade Nightopia [1] and creations of Wizeman the Wicked. Their goal is to steal Ideya, the dream energy from humans.

All of the Nightmarens were created by Wizeman for the sole purpose of stealing dreamers' ideyas. They take many different forms and have a variety of abilities. Their biggest weakness is the Ideya of Courage, which due to its enormous power, no Nightmaren but the first levels can steal it.[2]

The Nightmarens follow a system where they are ranked as first, second, or third-level Nightmarens:

Above all of the Nightmarens, there's Wizeman the Wicked, the God and creator of Nightmare and its inhabitants. Wizeman has many powers including power of creation and reality manipulation. He can also bring Nightmarens back to life as well as reset them (though the latter was only mentioned and never shown onscreen).

Wizeman's biggest weakness is the red ideya of courage. Thanks to it, NiGHTS is capable of fighting and defeating Wizeman. However, according to Wizeman himself, he will never be permanently destroyed as long as darkness still exists within the hearts of humans.

First levels are the highest ranked and most powerful Nightmarens. NiGHTS and Reala are the only first levels, and are notable for their superior flying ability and their ability to paraloop. First levels also appear to be quite strong, as NiGHTS has been seen carrying and throwing giant objects as well as giant Nightmarens, such as Cerberus.

First Level Nightmarens were created to be Wizeman's second-in-command over the other Nightmarens, but much to Wizeman's surprise, NiGHTS decided to rebel.

In Journey of Dreams, First Level Nightmarens are meant to wear a Persona Mask as a symbol of loyalty for Master Wizeman. Something that NiGHTS doesn't do due their rebellion.

According to Jackle's Japanese bio in NiGHTS into Dreams, Wizeman intended him to be a First level, but something failed during his creation.[3] This implies that First Level Nightmarens are difficult for Wizeman to create which may explain why he keeps trying to make NiGHTS his minion again.

Second levels are below power and rank to first levels, but above third levels. They dwell in their own Nightmare and draw NiGHTS and the visitor there after NiGHTS had been freed from their prison.

Each second level and Nightmare are allocated to a Nightopia in order to invade it, lead the third levels, and retrieve NiGHTS for Wizeman. According to the now unavailable NiGHTS into Dreams English website, the Second level Nightmarens have the ability to create their own worlds due to being more intelligent then Third Level Nightmarens.[4]

These are all the minor Nightmaren creatures that appear throughout the gameplay and come in many forms, from the iconic Shleeps to the small Beezes. Their purpose is to invade Nightopia and steal ideyas. They will attack NiGHTS, but are easily dispatched by NiGHTS with Paraloop, Drill Attack, Touch Dash or Touch Loop. They serve as obstacles during gameplay.

They are also known to chase and eat Nightopians in Journey of Dreams. Third-level Nightmarens are easily beaten if Helen or Will toss Blue Chips at them.

The following Nightmarens levels are unknown:

These Nightmarens have a very unique behavior, as they completely vanish after seeing the light and are not seen again after the intro cutscenes. It is unknown to what happens if they got the dreamers, or if they follow the usual level system. However, they can manipulate the environment, just like the second level Nightmarens. They also appear to have the ability to either teleport or turn invisible, considering that they appear out of nowhere in Will's intro. It is uncertain to what the limits of their shapeshifting abilities are, seeing that one of them was capable to shapeshift into a projection of Helen's mom in Helen's dream, for example.

Selph is a scrapped character from NiGHTS into Dreams who was originally going to appear in the game as a secret boss.[5] Their level is unknown and as they were going to be a secret boss (which would be something unique for them), they might not even follow the usual level system. In fact, Selph is speculated to not even be a Nightmaren.

Goodles are grinning imp-like Nightmarens from NiGHTS: Journey of Dreams who's main tasks are to apprehend NiGHTS and guard their captures. [6] They ride unnamed bird-like Nightmarens. When NiGHTS escapes from the NiGHTS Capture, they will try to escape from the latter with the keys.

Several red fishes surrond Gulpo's tank in his boss fight in NiGHTS into Dreams. They can be used by both NiGHTS and Gulpo to attack each other. It's unknown if they are actually Nightmarens or just items created by Gulpo, though if they are Nightmarens and follow the Nightmaren system, they can be assumed to be third level Nightmarens due to their small size and simplistic design.

Although it is not definitive to what level Bomamba's cats are, it can be assumed that they are most likely third level Nightmarens, as they can be defeated with a single attack, similar to the rest of the Nightmarens from that level.

During the Cerberus fight, it is possible to spot some crows flying around, but is not known if they are Nightmarens. It is likely that they are just part of the aesthetics in the battlefield Cerberus created.

Nightmarens from Elliot's intro in NiGHTS into Dreams

A Nightmaren from Claris' intro in NiGHTS into Dreams

Nightmarens according to the (now unavailable) NiGHTS into Dreams English website.

Two Nightmarens disguised as soccer players behind Will in his opening cutscene in NiGHTS: Journey of Dreams

Helen running away from Nightmarens in NiGHTS: Journey of Dreams

NiGHTS and the NiGHTS into Dreams bosses. 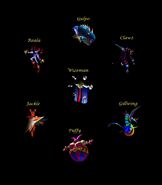 Wizeman, Reala and all of the NiGHTS into Dreams second level Nightmaren

All of the NiGHTS into Dreams third level Nightmaren.

All of the NiGHTS Journey of Dreams third level Nightmaren

Nightmarens in the NiGHTS Storybook.