Nights into Dreams Wiki
Register
Don't have an account?
Sign In
Advertisement
in: Characters, Main Characters, Journey of Dreams Characters,
and 2 more

Owl is a supporting character in NiGHTS: Journey of Dreams. He is an elderly owl who guides both Will and Helen throughout the game.

Owl has a brown colored head, beige torso, yellow feet, purple eyes surrounded by white feathers, tiny glasses, a yellow beak and long brown eyebrows. He wears a blue outfit with a purple gem on the chest and a brown coat with with pink collar and yellow lines.

Owl is shown in the game to have very good manners, greeting the visitors and addressing to Helen as "mademoiselle" when he first meets her. Owl also panics easily in certain situations and gets irritated by NiGHTS's childish behavior, but he has been known to stand up for Visitors in trouble, such as when Reala was approaching Will in the Lost Park.

Once Will and Helen arrive at the Dream Gate, Owl greets them and introduces the Night Dimension to them.

Afterwards, Owl will follow NiGHTS and the Visitors as well as assist the player by explaining them the game's mechanics, NiGHTS abilities, enemies behavior and more throughout the whole game.

Owl panics easily in situations and is irritated by NiGHTS' childish behavior, but he has been known to stand up for Visitors in trouble, such as when Reala was approaching Will in the Lost Park Nightopia. He has also shown to have the ability to teleport throughout different dreams in Nightopia.

Owl mysteriously disappears in both Will and Helen stories once Bellbridge is unlocked. 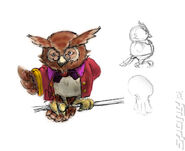 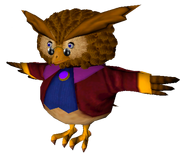