Parties are colorful fish-like third level Nightmarens and enemies in NiGHTS into Dreams.

Party is a red fish-like Nightmaren with big lips, green eyes and dark blue eyelashes. It has yellow fins which look like butterfly wings with red, blue, pink, cyan and white spots, and a deformed red tail with green spots. Party appears to be based on the Freshwater Butterfly Fish.

After the Visitors dualize with NiGHTS, the Parties throughout the levels will try to attack NiGHTS with their tails. If NiGHTS is hit, they will lose five seconds from the timer.

Defeating a Party will add 200 points for the player's score.

The Party Mepians have a round red head with big green eyes, dark blue eyebrows and two yellow butterfly-like wings on the top. The torso is round and red colored and it comes with wings similar to Party's, though they are only yellow and orange colored, unlike Party's wings, which have mutible colors. Party Mepians' arms and legs are red with green stripes, resembling Party's tail.

A Party Mepian egg is pink with two red stripes and some small yellow spikes.

A Party with other Nightmarens. 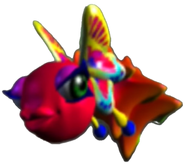 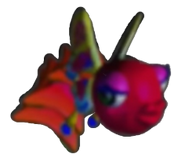 Party in NiGHTS into Dreams.

Party in NiGHTS into Dreams.

Party in the credits. 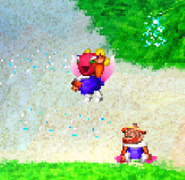 A Mepian with a Party head.

Party in NiGHTS: Flying Through the Sky Without Wings