Ruthlessly Extreme Measures (or R.E.M.) is a mysterious terrorist group and the secondary antagonists of the second mini-series of the NiGHTS Archie Comics series.

R.E.M. is a terrorist group, hired by an unknown person, that tries to blow up the Twin Seeds tower in the fourth Issue of the NiGHTS into Dreams Archie Comics series. At first, they seem to be trying to take revenge on the tower's owner, Emmanuel Weiss, as in the fourth issue they say that the tower's owner will "pay for his crimes". However, at the end of the sixth issue, it is hinted that Emmanuel might be actually working with them, as he agrees with their plan of blowing up the Twin Seeds tower.

As the comic series was discontined after the sixth Issue, the group's goals were never explained and the person who hired them was never revealed.

In the fourth Issue, three R.E.M. agents were about to attack the Twin Seeds tower, when NiGHTS breaks into the tower and unintentionally distracts the terrorists until the Twin Seeds police force arrive and arrest them.

In the fifth Issue, the three arrested agents are interrogated by Lucy O'Lawful, who asks them why they tried to takeover the Twin Seeds tower and who was the mysterious purple being working with them. However, all they reveal is that there's something very weird happening with the tower and that NiGHTS wasn't working with them, in fact, NiGHTS was the reason their takeover failed. Shortly after, the the leader of R.E.M. invades the police department with a tank to rescue the three arrested members. In an old abandoned warehouse, the four terrorists reunite to discuss about their next plans and the leader presents her new invention; a powerful bomb called "The Dream-bomb".

As the comic series was discontined after the sixth Issue, the group's goals were never revealed. 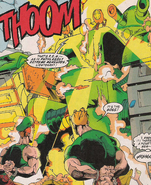 The leader of R.E.M. invading the police department with a tank.
Community content is available under CC-BY-SA unless otherwise noted.
Advertisement