Verols can only be found in Soft Museum. Once Claris enters the Nightopia, two Verols will steal two of her ideyas. After Claris dualize with NiGHTS, the Verols throughout the level will disguise themselves as Blue Chips to fool the player. Also, they'll sometimes turn into a ball, rise their spikes up and jump around the level. If they hit NiGHTS, the latter will be damaged and will lose five seconds.

Defeating a Verol will add 200 points for the player's score.

The Verol Mepians have a triangular green head with blue eyes, yellow lower lip and yellow antennas similar to Verol's. Their torso is green with a yellow spot on the front and a purple stripe on the back. Their arms and legs are green with two yellow fingers. Their back also have four green spikes.

A Verol Mepian egg is green with a purple stripe and a few small yellow spikes. 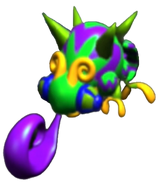 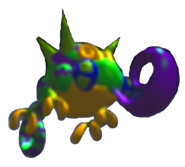 Verol in NiGHTS into Dreams.

Verol in NiGHTS into Dreams.

Verols in the game's credits.

A Verol about to eat a Nightopian in NiGHTS: Flying Through the Sky Without Wings